Film screening: "The Other Side of Everything" with film director Mila Turaljic

Venue: Aula on the Campus (https://goo.gl/maps/9ZDBVMdJTEACQPJW9)

A locked door inside a Belgrade apartment has kept one family separated from their past for over 70 years. As the filmmaker begins an intimate conversation with her mother, the political fault line running through their home reveals a house and a country haunted by history. The chronicle of a family in Serbia turns into a searing portrait of an activist in times of great turmoil, questioning the responsibility of each generation to fight for their future. 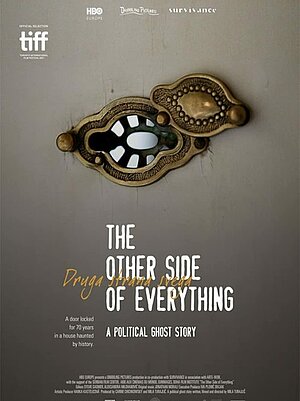 Mila Turajlić is a documentary filmmaker and archive scholar born in Belgrade, Yugoslavia. Her films have screened at numerous festivals including Toronto and Tribeca, and have been released theatrically in France, Germany, UK, US, Uruguay and across the former Yugoslavia. Her most recent film THE OTHER SIDE OF EVERYTHING (2017) was HBO Europe’s first co-production with Serbia. It won 32 awards including the IDFA Award for Best Documentary Film, the Grand Prix for Best historical documentary released in France in 2018, and was nominated for the LUX Prize the European Parliament. In her work with archives, Mila researches the intersection of personal and national memories, always seeking to reactivate forgotten histories, through forms ranging from lecture performances and video art to analytical essays.