United for Change – What Does the New Government in Prague Mean for the Region?

Since 17 December 2021, Petr Fiala has been the new head of the Czech government. This new conservative government marks the end of the reign of the liberal-populist Andrej Babiš, whose corruption scandals and admiration for Hungarian PM Viktor Orbán increasingly made the Czech Republic seem a problem for the EU. The formation of electoral alliances among smaller parties was decisive for overcoming the fragmentation of the opposition and gathering enough votes to bring down the government. 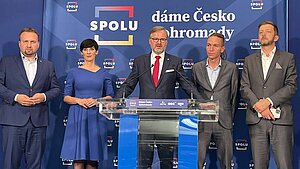 The Political Scene Leading up to the 2021 Election

The Czech political landscape has been very fragmented since the re-instruction of multiparty democracy in 1989. The anti-communist collective movement of the ‘Velvet Revolution’, Občanské Fórum (OF), was the organizational basis for democratic parties in the Czech Republic until 1991. It split up into right-wing and left-wing parties, the right-wing conservativeODS of Prime Minister Fiala being the only party continuously represented in parliament for the last thirty years.

Fragmentation has been on the rise in recent years. After the 2017 parliamentary elections, the left-wing political spectrum consisted of two rather smalls parties, the Communists and the Social Democrats, which each received some 7 per cent of the vote. The political centre was occupied by the left-liberal Pirates, a medium-sized power with 11 per cent of the vote, and the liberal-populist ANO, which also appealed to many left-wing voters and won the elections with 30 per cent. To the right of centre, the conservative ODS received 12 per cent, while three smaller parties scored 5 per cent each: the Christian-conservative KDU-ČSL, the liberal-conservative TOP 09, and the small-town rural STAN. The picture was completed by the far-right nationalist party SPD with 10 per cent.

When ANO took the unchallenged lead in 2017, initially the other parties did not know how to react. The Social Democrats accepted the offer to form a coalition with ANO. With the silent support of the Communists and the nationalist SPD, this coalition had a clear majority in parliament and could govern comfortably. A repetition of this constellation seemed very likely before the 2021 election, especially if the opposition parties continued to attack each other and many small subjects overcame the 5-per-cent threshold, which in turn would give Babiš the opportunity to choose from a variety of options.

Forming electoral alliances seemed to be a possible way for the opposition parties to join forces and challenge the government. This strategy was not unproblematic, since such alliances need to pass a higher threshold to enter parliament, 8 per cent in the case of two-party alliances and 11 per cent in the case of three-party alliances. But eventually the desire for change and to prevent a new Babiš government prevailed. Against resistance within their own ranks, the opposition parties formed two alliances: the Pirates joined the STAN party to become the PirSTAN alliance, and the ODS joined the KDU-ČSL and TOP09 to become SPOLU.

The 2021 parliamentary elections completely reshuffled the cards in the Czech Republic. With 27.79 per cent of the vote, Petr Fiala’s SPOLU claimed the election victory over Andrej Babiš’ ANO (27.12 per cent), although the alliance achieved one less mandate than ANO (71 against 72) because of the distribution of seats among the country’s fourteen regions. The PirSTAN alliance followed in third place with 15.62 per cent and 37 mandates. The turnout of 65.43 per cent, a relatively high figure for the region, had significant consequences for the outcome of the election: an increased share of younger and middle-class voters not only meant that the two opposition alliances received more votes, but the increased turnout also raised the number of votes needed to enter parliament. Thus, the Communists, the Social Democrats and also some right-wing populist groups, all potential Babiš supporters, remained below the 5-per-cent parliamentary threshold.

The Causes of the Results

But what decided the elections? In the analysis of the Czech sociologist Daniel Prokop and his PAQ Research Centre, ANO ran an aggressively negative election campaign. In its advertisements, the party stoked many fears, mainly attacking the Pirates, who in their alliance with the STAN Party had still been considered possible election winners in the spring. ANO portrayed the Pirates as neo-Marxists who wanted to take the country back to the time before 1989 and to put a refugee in every citizen’s home. Babiš also reacted angrily to allegations of corruption repeatedly brought up in the election campaign, as well as to the emergence of his name in the Pandora Papers, yet without providing evidence to the contrary. This caused some Babiš supporters to stay at home. While ANO received every other vote from pensioners and also obtained 24 per cent among middle-aged voters without a school-leaving certificate, the party did poorly with all other groups of voters. Babiš’s gentle treatment of the SPOLU alliance, which he courted as a possible coalition partner, and the calm, level-headed demeanour of SPOLU’s leading candidate, Fiala, seem to have swung the decision in favour of the alliance, which gained strong support from all age and socio-economic groups.

The opposition alliances were conspicuously voted for by the young. They enjoyed particular success among voters under the age of 34, combining sixty-four per cent of their vote between them, with women more likely to vote for the liberal PirSTAN and men more likely to vote for the conservative SPOLU. Thanks to the electoral alliances, voters for smaller parties could also be sure that their vote would not be lost and might even enable the party of their choice to win, which in turn was an important mobilisation factor.

In contrast, the performance of the political left was disastrous. The Communists committed to cooperating with ANO very early in the campaign, which made them unelectable for many young left-wingers. For Communist-voting pensioners, ANO appeared the stronger force. Thus, 32 years after the Velvet Revolution, the Communist Party of Bohemia and Moravia fell out of parliament for the very first time. The Social Democrats were also weakened by their participation in the government with ANO. Babiš’s own mass press (Dnes and Lidové noviny) succeeded in presenting ANO as a left-wing alternative to the “traditional” left, above all because the Social Democrats were too preoccupied with themselves. They elected a new leadership shortly before the election. Shortly thereafter, the winner, Jan Hamáček, failed to investigate the explosion of an ammunition depot in Vrbětice, where the involvement of Russian intelligence is suspected.

The new government’s paramount task will be to tackle the country’s problems such as rising housing and energy prices, the implementation of the Green Deal policy, and the country’s overdependence on car production. The Ukraine war decisively changed Czech foreign and immigration policy. Fiala, together with his Polish and Slovenian colleagues, surprised the world when they visited Kiev, a city besieged and shelled by the Russian army. The Czech Republic and Poland subsequently became the strongest advocates of EU accession for Ukraine and made an admirable job of hosting Ukrainian war refugees. As a result of this commitment, cooperation within the Visegrád states V4 is also practically on hold because Orbán does not want to give up his close relationship with Putin.

The Czech case suggests that the formation of electoral alliances among opposition parties is becoming the strategy of choice in Central and Eastern Europe to challenge dominant governments. Fiala was successful with this strategy in 2021. In Slovakia, this is how Igor Matovič was able to prevail against the long-time leader of the government, Robert Fico, as early as 2020. However, the Hungarian elections showed that this electoral strategy does not always have to lead to success. The factors that contributed to Péter Márki-Zay’s failure need to be analysed, but the Ukraine conflict clearly changed preferences in favour of Orbán.

Mojmir Stransky is currently assistant at the Institute for Eastern European History at the University of Vienna and history teacher at the bilingual secondary Komensky School. His research focuses on the History of the Czech Republic, History of Czechoslovakia, History of Transformations in Central and Eastern Europe as well as the study of Volunteerism in State Socialism and the History of Associations.

Tags: Elections, Politics, Society
Back
Mojmír Stránský, M.A.
"Volunteering in Local Communities between Late Socialism and Liberal Capitalism: The History of Volunteer Fire Departments in Germany and East Central Europe, 1980-2000".
Do you like cookies? 🍪 We use cookies to ensure you get the best experience on our website. Learn more