What is to be done about Bosnia and Herzegovina? Political observers and members of the international community have been asking this question since the end of the Bosnian War in 1995. Since then, Bosnia’s statehood has been persistently threatened by domestic political issues, jeopardizing the country’s integrity. Due to the complicated systems of governance and Bosnia’s electoral law in need of reform, political tensions within the country are high in light of the upcoming general elections, scheduled for October 2022.

Political tensions within Bosnia reached a new level last year between the two legal entities within the state: the Federation of Bosnia and Herzegovina and Republika Srpska (RS), home to most Bosnian Serbs. Bosnian Serb presidency member and the head of Republika Srpska Milorad Dodik , ordered RS officials to boycott Bosnia’s state institutions. This happened in reaction to a genocide denial ban imposed by Bosnia’s former High Representative Valentin Inzko in July 2021.

The reactions by Bosnian Serb officials unveiled yet again deep ethnopolitical tensions within the country, with Dodik himself claiming that there was no genocide in Srebrenica during the Bosnian War. In February 2022, Bosnian Serb lawmakers allowed their own officials to re-join Bosnia’s state institutions, under the condition, however, that they be allowed to represent official decisions adopted by the Republika Srpska’s governing bodies, such as the denial of the Srebrenica genocide. The institutional boycott left its mark on the country’s policy making process and can be regarded as a de facto blockade of Bosnia’s Presidency, Parliament, and Council of Ministers, rendering the country practically ungovernable.

The situation in Bosnia hasn’t always been this bleak. With the adoption of the Dayton Agreement in 1995 (a comprehensive peace treaty with an Annex serving as Bosnia’s constitution), initial hope emerged that the multi-ethnic Balkan country might eventually succeed to consolidate its three most prominent ethnicities – the Croat (Catholic), Serb (Orthodox), and Bosniak (Muslim) peoples – who had been torn apart during the catastrophic war during the years 1992-1995. In hindsight, it is clear that the Dayton Agreement’s initial promise of a Bosnian consolidation was never fulfilled.

In fact, Bosnia’s precarious ethnopolitical situation is rooted in this very agreement, which divided the country into a Croatian-Muslim joint federation (the Federation of Bosnia and Herzegovina), and a Serb-dominated entity (Republika Srpska). As a peace treaty, it doubtlessly contributed to ending the Bosnian war and to establishing a stable status quo in the Western Balkans. Yet, although it did create an institutional framework to govern the country,  the document failed to consolidate Bosnia’s civil society, by codifying governmental and political structures which preserve a deep ethnic segregation in Bosnia. 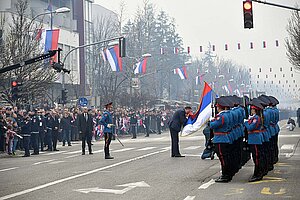 Milorad Dodik kissing the flag of Republika Srpska before the 2018 Republic Day parade in Banja Luka.

Ethnicity itself plays a pivotal role in the country’s policy making process, since the constitution excludes other ethnicities from the electoral process. In 2009, the European Court of Human Rights (ECHR) described Bosnia’s presidential electoral law as discriminatory, following a complaint by the chairman of Bosnia’s Jewish community, Jakob Finci, and Dervo Sejdić, head of a Bosnian Roma organization. Both their communities were excluded from participating in Bosnia’s presidential elections, since none of them identified as a Croat, Serb, or a Bosniak. The ECHR ruled that this practice breached the European Convention on Human Rights and obliged Bosnian authorities to remedy those ethnic restrictions. However, due to the country’s domestic political disunion, policy makers so far have failed to reform the electoral law.

But beyond the electoral law, the issue of a third entity for Croats remains yet to be solved. EU foreign policy head Josep Borrell already warned of the risk of the unilateral creation of such an entity at the Munich Security Conference in February 2022. He warned that Bosnian Croat political parties had threatened to establish their own ethnic Croatian region within Bosnia, unless the country’s electoral law was amended to increase ethnic Croatian political representation on the state level.

Beyond these underlying systemic constitutional issues, Bosnia is confronted with a toxic ethnopolitical environment. By calling for the withdrawal of the Republika Srpska’s cooperation, Milorad Dodik actively jeopardizes Bosnia’s central institutions. In addition, he has announced intentions to reverse several laws, affecting the country’s joint armed forces, tax system and judiciary. In December 2021, Republika Srpska’s National Assembly adopted a set of measures to allocate judiciary, tax, and military competencies from the Bosnian state to the Bosnian Serb entity, proving that Dodik's statements weren't mere idle threats. Bosnian Serb lawmakers also approved a draft bill in February 2022 for the establishment of a Bosnian Serb autonomous High Judicial and Prosecutorial Council. NGOs and international organisations warned that the establishment of such a judicial body could undermine the primacy of Bosnia’s rule of law.

By openly promoting the secession of Republika Srpska, Dodik aims to transfer official decision-making competencies and thus increase the Serb entity’s autonomy in the policy making process. The very fear of losing their semi-autonomous status and political influence is one of the main reasons why party leaders have failed to reform the Dayton Agreement.

Republika Srpska’s officials do not stand alone with their aspirations for autonomy. They maintain close ties with the Serbian and Russian governments. It is evident that Russia tries to increase its geopolitical foothold in the Western Balkan region through the Bosnian Serb entity. This influence was demonstrated several times: economically in 2015, when the Russian state-owned Gazprom company signed an oil supply agreement directly with Republika Srpska, and politically in 2021, when the Kremlin refused to recognise the appointment of Bosnia’s new High Representative, Christian Schmidt.

Since the launch of Russia’s military offensive against Ukraine in February 2022, Dodik has also opposed his Bosniak and Bosnian Croat colleagues in Bosnia’s tripartite Presidency by stressing that Bosnia would not join the EU-bloc in imposing sanctions against Russia. So far, Dodik kept his promise: RS officials vetoed a decision this March that would have denied Russia and Belarus access to funds from the European Bank for Reconstruction and Development (EBRD).

Dodik also said that Republika Srpska authorities still plan to expand the Bosnian Serb entity’s gas network in cooperation with Russia, despite the invasion of Ukraine.

Close ties between Hungary and the Bosnian Serb entity were additionally noticeable in January 2022, when Hungary’s PM Viktor Orbán pledged a 100 million euro financial state aid to the Republika Srpska.

The international community, including EU authorities, is monitoring Dodik’s actions with great concern, since the Serb entity’s secession could potentially destabilize the Western Balkan region and lead to a renewed armed conflict in Bosnia. The US government already imposed sanctions against Dodik in January 2022. The EU suspended 125 million euros in COVID-19 state aid to Bosnia, and is considering imposing proper sanctions against Republika Srpska officials, including asset freeze and travel bans.

While Germany has made a strong bid for sanctions within the EU, such a decision would still require a unanimous vote. A united EU response has so far been prevented by the Hungarian, Slovenian, and Croatian governments. Hungarian PM Orbán already pledged in December 2021 that he would veto sanctions against Dodik, followed by his foreign minister Szijjártó expressing concerns that such sanctions might be counterproductive in the EU’s Western Balkans expansion efforts.Dodik also threatened that his Alliance of Independent Social Democrats (SNSD) party was to block all federal development projects within Bosnia, should the EU decide to impose sanctions against him.

It remains to be seen whether the EU will reach a consensus to act. Some efforts have already been set in motion in February 2022, with the European Parliament adopting an amendment to the EU’s annual foreign policy report, which denounced secessionist measures by Bosnian Serb officials and called on the European Council to impose sanctions against Dodik. The report received the support of 504 MEPs, however, 97 parliamentarians still opposed it.

The essential question is how to overcome the legacy of the Bosnian War. The ethnopolitical situation is indeed very complex and unpredictable.

It is clear, nevertheless, that Bosnia’s political society must be consolidated first, to allow for any constitutional or institutional reform – an impossible task without the full cooperation of Bosnian Serb officials. Until then, the mass exodus and brain drain, haunting the country since 1995, will continue. Bosnia’s demography unfortunately paints a grim picture: the pre-war population of 4.4 million has  contracted to an estimated 3.3 million in 2020 – the loss of a quarter of the population not only in the bloodshed, but also on account of the country’s dysfunctional political system.

Bernd Christoph Ströhm, M.A.I.S., M.A., is a doctoral fellow in East European und Eurasian Studies at the University of Vienna Doctoral School of Historical and Cultural Studies. His doctoral thesis is examining the dissident movement of the Soviet Union and the relationship between Soviet dissidents and the (West)-German press during the Cold War period. In addition to completing his doctoral project, he works as country expert and analyst at the Vienna Institute for International Economic Studies (wiiw) and at S&P Global, with special focus on Central and Eastern Europe (CEEC).